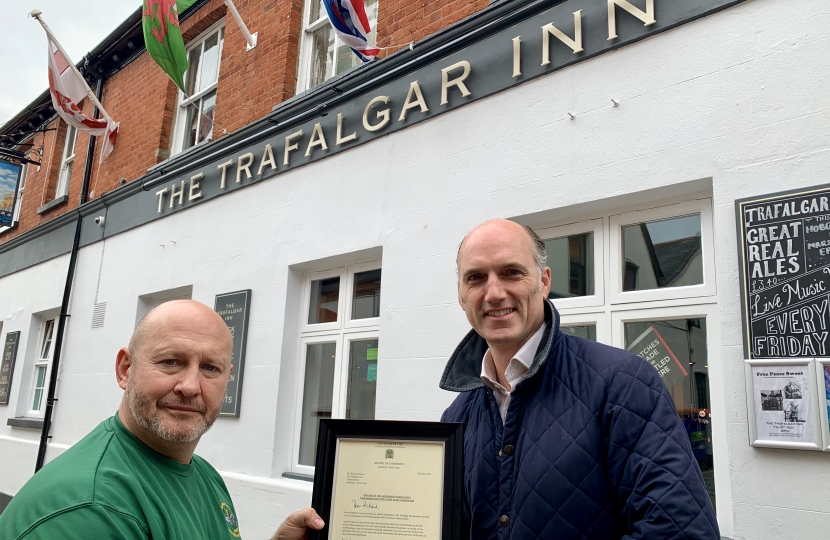 After a social media campaign engaged with by in excess of 15,000 residents from across Aldershot, Farnborough and Blackwater, over 500 individual nominations were received by local MP Leo Docherty for this year's Parliamentary Pub of the Year Awards.

Leo said: "I am delighted to announce that, by public acclamation, The Trafalgar Inn has been selected as my nomination for the Parliamentary Pub of the Year Awards 2019!

A great many patrons got in touch to recommend The Traff for this award. They commended the pub for its family-friendly atmosphere, variety of live entertainment, and the fantastic hospitality offered by Landlord Richard 'Stace' Stacey and his team. Many described The Traf as more than just a pub, but instead ‘the spiritual home’ to the men of the maroon beret.

The pub's walls are proudly adorned with history, its memorial garden is a tribute to the fallen, and – more than any other - The Traf underpins the strong historic links between the British Airborne Forces and Aldershot, the Home of the British Army. It helps keep our town’s history alive for generations to come.

Furthermore, I salute Stace's considerable and continued fundraising efforts to support our Veterans. This year, however, they outdid themselves - with over £7,000 raised towards the cost of the magnificent Airborne Statue that now stands proudly in the heart of the town in Princes Gardens.

Stace is, undoubtedly, a much-loved and well-respected member of our local community, and he should be incredibly proud of the work that he and the team at The Trafalgar Inn do on a daily basis to support our community, as well as our Veterans.

I am therefore incredibly proud to have nominated Richard Stacey and The Trafalgar Inn for this year’s awards, and wish you every success in the competition!"

These awards focus on celebrating pubs in our community and give all 650 MPs the opportunity to nominate a pub to be recognised as the Parliamentary Pub of the Year. The main criteria for nomination is a pub that is great at what they do, this can include the range of beer or food provided, the dedication to serving the local community or a specialism in music or sports.

The Traf, as Leo's local recommendation, will now be put forward to the regional and national finals.