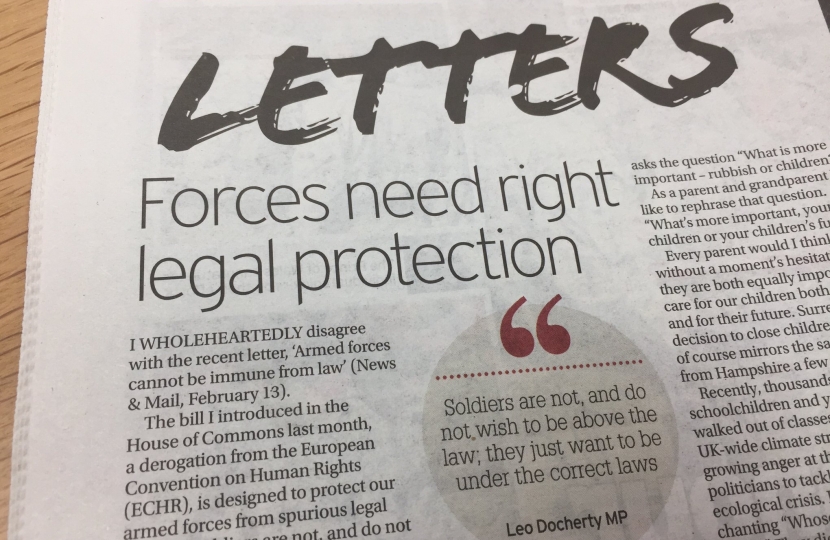 Soldiers are not, and not wish to be above the law, they just want to be under the correct laws. My piece for this week's Aldershot and Farnborough News & Mail:

"I wholeheartedly disagree with the recent letter, ‘Armed forces cannot be immune from law’ (News & Mail, 13th February). The bill I introduced in the House of Commons last month, a derogation from the European Convention on Human Rights (ECHR), is designed to protect our armed forces from spurious legal pursuit.

Soldiers are not and do not wish to be above the law; they just want to be under the correct laws. It has been the case for generations that the Law of Armed Conflict and the Geneva Conventions have governed warfare in the modern age. This was until 1998, and the unintended consequences of the Human Rights Act and the ECHR, which has led to a catalogue of injustice.

No other country has such a perverse situation in which its service personnel, who have done their duty and done no wrong, face sustained legal pursuit. Ten European countries, including France and Spain, have in effect already opted out of aspects of the ECHR. I believe we must do the same.

Our armed forces are extremely versatile and adaptable - they can be superb peacekeepers, aid workers, police officers, and diplomats. However, their primary function is to deliver hard fighting power and destroy our enemies if necessary. They must have the correct basis in law to do that, in situations where domestic human rights law is completely and utterly inapplicable.

We must bring an end to the entanglement of our armed forces in human rights law. They need to know they have the full confidence of our Government and our society, allowing them to serve in good faith and with pride for the safety of our people and the defence of our nation."