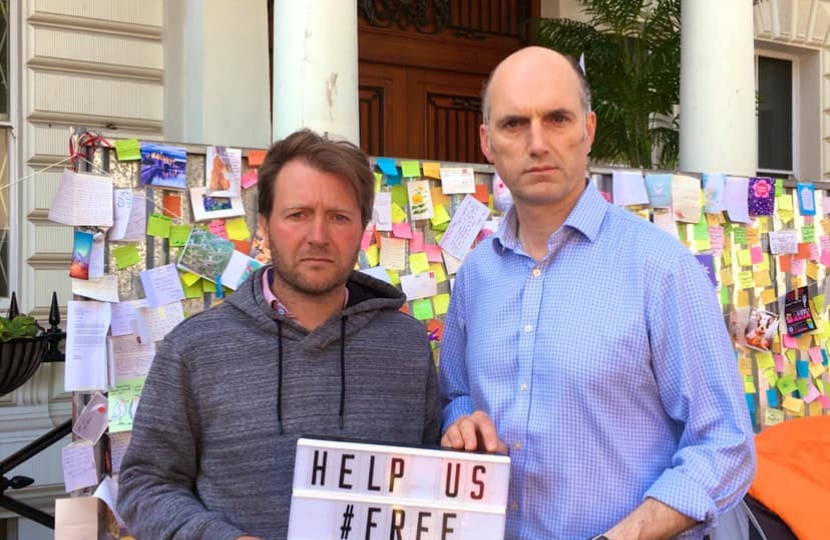 Leo said: "I stood in solidarity earlier this week with Aldershot-born Richard Ratcliffe, husband of Iran detainee Nazanin Zaghari-Ratcliffe, outside the Iranian Embassy as he continued his hunger strike and campaign to see her released.

It is a desperately sad situation and I do empathise with her husband Richard doing all he can to keep her plight in the public eye."

The Foreign and Commonwealth Office (FCO) works tirelessly for all dual nationals detained in Iran and is doing everything it can in each of their cases, including trying to secure access to them and ensure their welfare. This is particularly challenging in Nazanin's case because the Iranian Government does not recognise dual nationality and therefore does not accept the UK Government's request for consular access."

The UK Government has also regularly raised Nazanin's case at the highest levels within the Iranian Government. Indeed, the Prime Minister herself raised her concerns over the case with President Rouhani of Iran at the fringes of the UN Security Council meeting last year.

Leo added: "I am encouraged that the FCO have now taken the decision to grant Nazanin diplomatic protection. This makes clear that the UK believes that Iran's treatment of her has failed to meet international standards and elevates the issue beyond that of normal consular assistance and diplomatic pressure to the level of a legal dispute between Britain and Iran.

While the Foreign Secretary has been clear that the move is unlikely to solve matters overnight, it does demonstrate to the whole world that Nazanin is innocent and the UK will not stand by while one of its citizens is treated so unjustly.

It is time for the Iranian Government to let Nazanin come home. I know that is what the Foreign Secretary is focused on achieving."