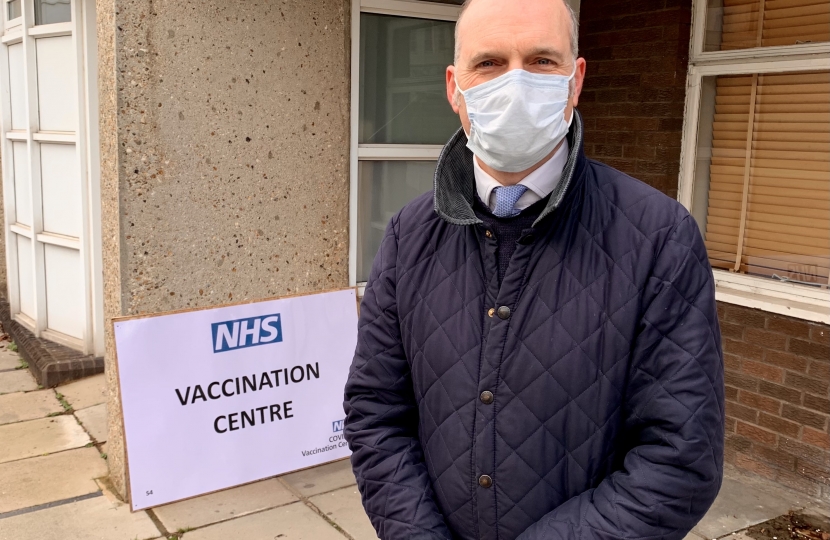 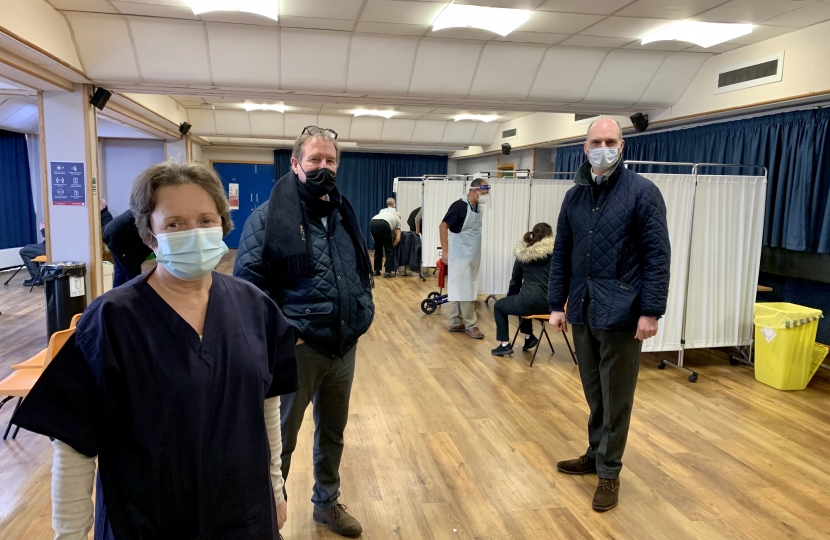 Leo has welcomed the Government’s Vaccines Delivery Plan – the biggest vaccination programme in British history – that sets ambitious targets as the government continues to ramp up its vaccine rollout.

Already in Frimley Health and Care ICS, 50,215 vaccinations have been administered as part of plans to vaccinate the top four priority groups by mid-February. In the South East Region, 587,282 people have received a vaccine with 660,633 doses administered in total across the area.

On top of this, the Government is opening up new vaccination sites every day as part of our Vaccine Delivery Plan to ensure everyone is within 10 miles of a vaccination centre. Leo has welcomed Church Crookham Pharmacy in Fleet becoming one of the latest places to begin administering the vaccination, and is continuing to explore options with NHS officials for local pharmacies in Rushmoor to be included as part of the community pharmacy vaccine rollout.

65 pharmacy sites are joining the programme this week and early next week with more to come.

“Our NHS vaccination programme, the biggest in our country’s history, has got off to a fantastic start thanks to the hard work of all of those involved. It’s great to see that so many people in my area have received the vaccine as we lead the world in our fight back against coronavirus."

"50,000 vaccine doses is an incredible achievement. This includes 45,000 local residents in the highest priority groups, including our over 80s and frontline heathcare staff, that have received at least their first vaccine dose.

Aldershot Primary Care Network announced earlier this week that they had already reached 3,000 vaccine doses since their hub at the Princes Hall in Aldershot launched just two weeks ago - with similar numbers expected from Southwood Surgery in Farnborough. This is an incredibly achievement."

"Thank you all the staff of North East Hampshire and Farnham, Surrey Heath and East Berkshire CCGs, primary care networks and GP surgeries across Aldershot, Farnborough and Blackwater, and our amazing volunteers from Rushmoor and Hart."

“I look forward to getting my vaccine over the coming months – and I urge everyone to do the same when they get the call up”.

“Vaccines are the way out of the pandemic and this historic rollout will cover every corner of the country. Community pharmacists have been phenomenal and will have a pivotal role to play in the continued expansion of the programme.

“Through the UK vaccine delivery plan, over four million people have already received their jab. From hospitals to pharmacies, sports clubs to places of worship – we’re making sure the vaccine is as accessible as possible.

“In the meantime it is vital everyone continues to play their part in this national effort by staying at home to protect the NHS.”