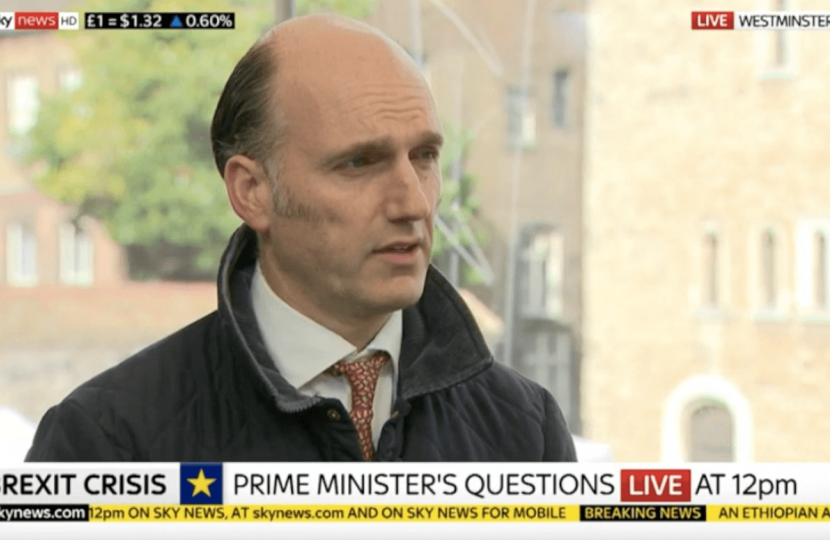 Following a number of votes on Brexit in Parliament this week, I wanted to provide you with a brief update and explain how and why I voted as I did.

On Tuesday, I voted to support the Prime Minister’s deal because I wanted the UK to leave the EU in a smooth and orderly manner with the Withdrawal Agreement on 29th March 2019. Due to the fact that 75 Conservative colleagues voted against the deal, it did not pass by a margin of 149.

On Wednesday, a vote was held on whether to take the “no deal” option off the table. There was also an amendment tabled by a cross-party group of backbench MPs who oppose Brexit. I voted against this amendment because keeping “no deal” on the table strengthens our hand in negotiations up until the day we leave. However, the House of Commons voted to take “no deal” off the table by 312 to 308.

Yesterday, there were further votes on Brexit, including a motion and amendments which would extend Article 50. I voted against extending Article 50 because I believe Brexit should not be delayed or frustrated. I believe we should leave the EU with the Prime Minister’s Withdrawal Agreement. However, Parliament voted by 413 to 202 to extend Article 50.

These votes are not legally binding and there is now a window of opportunity for the Withdrawal Agreement to come back to Parliament and for MPs to vote for it in a third Meaningful Vote, probably at the start of next week. I sincerely hope all Conservatives colleagues will unite behind the deal so that we can leave the EU in an orderly manner and give our country the certainty it needs to move forward.

I look forward to updating you again soon.