Why I'm proud of our statues 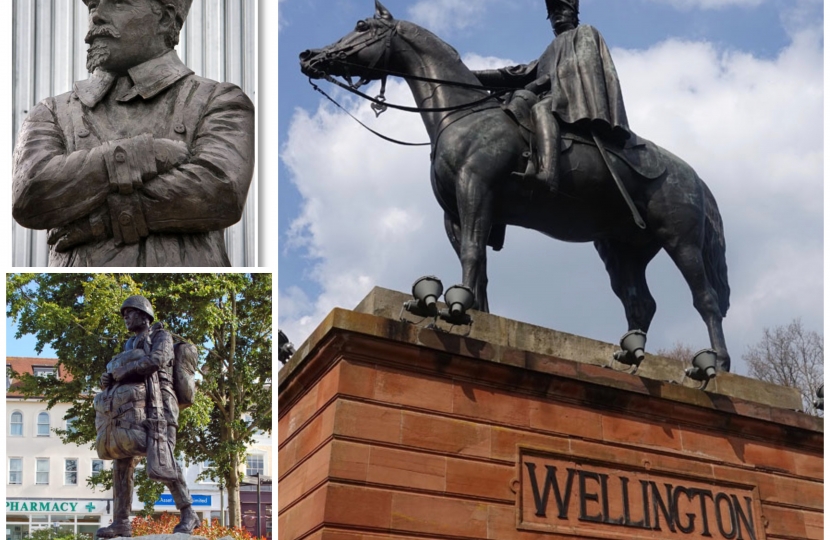 Why I’m proud of our statues

This week’s media coverage of attacks on our nation’s historical statues has got me thinking.

Firstly, I totally condemn these attacks, and call them out for what they are; mindless graffiti and criminal vandalism. The perpetrators should expect swift justice.

Secondly, it reminds me about the statues I know and love in Aldershot and Farnborough.

In Aldershot, the magnificent bronze statue of the Duke of Wellington which overlooks the Garrison - rightly famous as the Home of the British Army - symbolises the values of courage, patriotism and self-sacrifice that have inspired generations of soldiers since the Garrison was established in the 1850s. These values still resonate today in our thriving Garrison from which soldiers deploy all around the world in defence of our nation. It wouldn’t surprise me if left-wing liberals were to call for the Duke’s statue to be taken down, perhaps because the Iron Duke - before beating Napoleon - served much of his career fighting for the British Empire in India. But that would miss the point.

We should not seek to weaponise history to suit modern-day political correctness and misguided wokery.

In Aldershot Town Centre, we are honoured to have the magnificent statue of The Airborne Soldier commemorating the enduring connection between Aldershot, the Parachute Regiment, and British Airborne Forces. Paid for by an incredible local fundraising campaign led by Parachute Regiment veterans Richard Stacey and Tommy Simpson, the statue is cast in bronze and sits atop a plinth of Falkland Islands granite from the victorious battlefield of Mount Longdon. The Airborne Soldier is a reminder of the terrific bravery, remarkable sacrifice and unique spirit of martial prowess shown by the Parachute Regiment and British Airborne Forces since the Second World War through to the Falklands conflict, and operations in Northern Ireland, Afghanistan and Iraq. The statue, unveiled in July last year, is now a cherished part of our town centre, respected and admired by the whole community.

Indeed, I would like to see one more military statue erected in Aldershot; that of a Gurkha soldier, to reflect the magnificent service given by Gurkha soldiers to the British Crown over the last two centuries and now in the present day. I do hope before too long this will become a reality.

In Farnborough, the statue of Samuel Cody, the first British Aviator, which adorns the exterior of the FAST Museum, is a marvellous reminder of Farnborough’s unique place in history as the birthplace of British Aviation, where the fighting power of the Royal Air Force was first conceived by Lord Trenchard during the First World War and without which our victory in the Battle of Britain against the threat of Nazi invasion in 1940 would have been impossible.

I’m proud of all of these statues. I’m proud of the service, the patriotism and the courage they represent. They embody the best values of our nation; in the past, in the present, and for the future.

And they will, I am sure, be standing tall and proud, and much-loved by local people when the current media storm of flimsy political correctness is long-forgotten.