Embracing the opportunities of new Army units at Aldershot Garrison 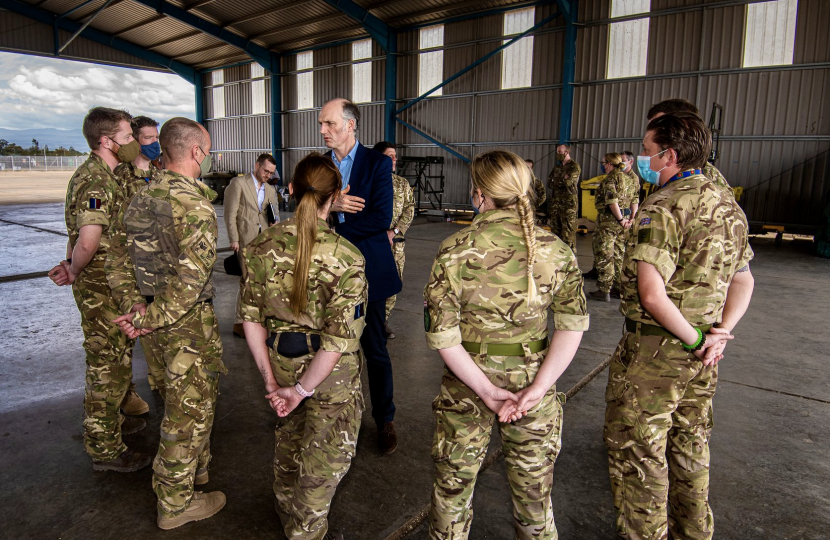 'Future Soldier' - the British Army's most radical transformation in 20 years - will create a new Ranger Regiment, part of a newly established Army Special Operations Brigade based at Aldershot Garrison.

This will mean hundreds of new Army personnel and their families in the town over the coming year, and Leo want to hear from local residents about what we can do to embrace the opportunities that a strengthened Garrison presents for our area.

"I thought it important to let local residents know that, as part of the Ministry of Defence’s Integrated Review last year, the British Army has outlined plans for its most radical transformation in 20 years, called Future Soldier – with a new thousand-strong ‘Ranger Regiment’ coming to Aldershot.

This new Ranger Regiment – one of the most significant announcements from the plans – will form part of a newly established Army Special Operations Brigade to be based in Aldershot. Routinely deployed alongside partner forces to counter extremist organisations and hostile state threats around the world, the Regiment will be formed of four “all-arms” battalions, three stationed here in Aldershot – 2 PWRR, 2 LANCS, and 4 RIFLES – which will mean hundreds more soldiers and their families on the Garrison over the coming years.

Aldershot Garrison remains home to thousands of Army personnel and forces families, as well as the headquarters for Home Command – the institutional backbone of the British Army – and Regional Command, responsible for Army operations here at home and HQ for personnel and their dependants in the UK, Nepal, and around the world.

I am also delighted that in addition to a strengthened Garrison, over £250 million of investment is already underway to transform Aldershot Town Centre – with regeneration schemes bringing new homes, shops, and public spaces over the next five years.

I’m looking forward to welcoming these new families, and working with the Garrison and our local councils to embrace the opportunities this presents for our area. I’m also keen to hear your views on what more we can do. You can write to me at 6 Union Street, Aldershot, GU11 1EG, or by email at leo.docherty.mp@parliament.uk, to share your ideas.

There is a bright future ahead for our town. I hope, like me, you will welcome this further vote of confidence in Aldershot as ‘Home of the British Army’."