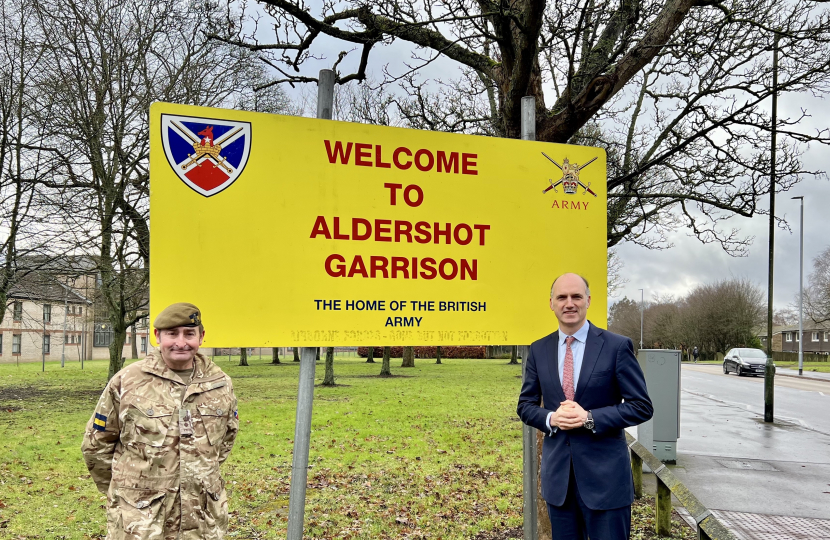 Since Leo's election in 2017, he has been acutely aware of the significant difficulties forces families across Aldershot Garrison have with slow and unreliable internet connections in their homes.

This is why he is delighted that army quarters across Aldershot Garrison should soon benefit from ultrafast fibre broadband as a result of plans announced by Openreach. He will continue to follow the project closely, and will be working with Openreach at every opportunity to bring the build forward as quickly as possible. Leo will of course continue to keep you updated, particularly when surveys begin later this year.

"You will be aware that over the last year, and indeed since I was first elected MP in 2017, I’ve been working to try and secure better broadband for our Armed Forces community in Service Family Accommodation (SFA) across Aldershot Garrison.

Today, after meeting with Openreach’s Chief Executive Officer, I am absolutely delighted to announced that all local army quarters across the Garrison should soon benefit from ultrafast fibre broadband as a result of plans just announced. Through their ‘Fibre First’ initiative, Openreach – who own and operate the UK’s broadband network – will soon upgrade infrastructure to ensure these homes are capable of delivering download speeds of up to 1,000Mbps (or 1Gbps).

Later this year a preparatory assessment will begin, with the build scheduled to start in April 2023 subject to those surveys.

I am acutely aware of the significant difficulties many local military families have historically had with Internet connectivity in their homes. After launching a further consultation last year asking for your experiences of connectivity, it was abundantly clear that the existing infrastructure is simply not good enough. Yours was one of hundreds of families that responded with universal frustration, citing significant difficulties working from home, completing schoolwork, and even simply checking emails.

Commander Aldershot Garrison, Lt Col Nick Burley, joined me in taking these concerns directly to Openreach, and making the case for urgent upgrades to local infrastructure.  After several months of discussions, and further pressure from the Army’s Regional Command, Aldershot’s inclusion in the next stage of the full-fibre rollout has now been announced.

For too long, hardworking service personnel and their families have been held back by slow broadband speeds – addressing this issue will help ensure yours and other military families are not disadvantaged by living in army quarters. Local facilities across the Garrison rely on the Internet now more than ever to work, educate their children, and stay in touch with loved ones – particularly when spouses are deployed abroad - so connection speeds have never been more important.

I will continue to follow the project closely, and will be working with Openreach at every opportunity to bring the build forward as quickly as possible. I will of course continue to keep you updated, particularly when surveys begin later this year.

Finally, you can now register your interest in full-fibre broadband with Openreach online."